We work with the best forklift companies...

Dr. Seuss might have chosen a different story line for his “Grinch Who Stole Christmas” had he read some of the startling statistics about the role forklifts play in modern E-commerce.  Nowhere has this become more evident than in an analysis of current figures for the volume of holiday sales generated by the major cyber sales leaders, such as Amazon.com.  In 2012, Amazon reported that the holiday shopping season was their most successful yet.  On Cyber Monday alone over 26.5 million items were purchased, amounting to 306 items per second.  Practically all 26.5 million products were handled in some way along the manufacture to delivery route by at least one forklift.

Armed with this information and the role played by forklifts in the process, Dr. Seuss’ updated story of the Grinch whose goal is to kill Christmas would be so much simpler.  All he would have to do would be to come up with some scheme to sabotage the forklift industry. The clever Grinch would certainly have the deviousness to cause some world-wide calamity that could disable all the forklifts not only in Whoville, but all those used by businesses worldwide to facilitate the movement of gifts to children everywhere in time for Christmas.

Several economic analysts have pretty much isolated the forklift as the precipitator of some of the greatest technological advances in the industrial world, especially the modern phenomenon of global manufacturing and distribution of common household products being marketed via the internet. Today, more new and used forklifts are used than ever before by businesses in there supply chains.

To illustrate this, a recent analysis suggested playing what he called “the forklift game.”  He got the idea when he ordered a popular Christmas gift from Amazon.com which was delivered directly to his front door by one of the national parcel services.  Just for fun, he decided to analyze how many times that product may have had an encounter with a forklift during its lifetime from being pliable raw material to its arrival at his door. If it was wooden, it may have had several such encounters in the forest of its origin until it was fully processed and delivered to the manufacturer where it would be fabricated into the final product.  During that cycle, it would have been assembled, using any combination of fasteners, such as staples, screws, glue or nails, that may have already been handled multiple times by forklifts, it would have been painted (with paint moved by forklifts) before being passed on for a variety of other activities at the mercy of a forklift.  During the various phases of it creation into a final product, it would have been moved or stacked by a forklift.  Its packaging would have gone through its own creative, storage and delivery cycles – with forklifts involved.  Preparation for storage and shipping to a distributor involved forklifts. Whether it ends up at a retailer or on a FedEx truck, chances are forklifts were used in the process.  A recent calculation indicates that our typical child’s holiday toy encountered between 15 and 21 forklifts on the way to grand pop’s front porch before being turned over to Santa Claus for final delivery using some kind of primitive flying sleigh to transport it to is final destination.

Another way of looking at the number of forklifts being used in society today is to consider China, where the majority of consumer products are manufactured.  According to www.reportlinker.com, a ResearchInChina industry report issued in 2012 reported that China is playing an increasingly prominent role in the global forklift market. Since it became the world’s first largest forklift sales market in 2009, China has been ranking No. 1 in sales volume of forklifts which has constituted around a quarter of the global total.  The global forklift industry hit a record high in 2011 with order quantity rising 23% and sales volume rising 27% over the previous year.  The total sales volume of forklifts broke 200,000 units in 2010 and 300,000 units in 2011, reaching a historic high. 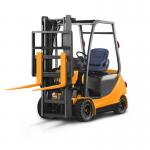 The average consumer is unaware of the role played by the forklift in the world economy.  The number of manufacturers of forklifts alone is an eye-opener.  There are numerous relatively small forklift companies in the world, but for our purposes in analyzing the industry, we can focus on the top twenty companies based on sales volume. An interesting exercise would be to have Ancestry.com do a family tree of the major material handling companies.  Because of mergers, buy outs, collaboration agreements, acquisitions and consolidations, a family tree of forklift companies looks like a history of arranged marriages, ugly divorces and pragmatic unions.  Just as enlightening is how companies evolved from the manufacture of a totally unrelated product line into a forklift operation.  For instance, the Yale Materials Handling Corporation began as the highly visible and successful Yale Lock Company.  More logically, Cat Forklifts are “stepchildren” of the famous Caterpillar earth moving industry leader.  The Japanese Forklift leader, Komatsu, Ltd., started as a Mining company. In some of these cases, the company gravitated to the design and development of forklifts as a practical response to the need to move and store their products.  Linde Material Handling North America began as a Wagon Repair Company dating back to 1853.  Its parent German company was founded in Hamburg by a refrigeration engineer named Dr. Carl von Linde.  Two of the major forklift companies are related directly to the auto industry, namely Toyota and Nissan.

It is hard to discover a single “inventor” of the forklift, because the years given as the beginning of the forklift operations within a company are the same in different companies in different parts of the world, causing it to appear that spontaneous combustion was the method by which forklifts burst onto the world scene.  Also, with so many versions of early material handling equipment, it is hard to say exactly what item deserves the label: “forklift.”  The inventors of a sled-like skid handler, not actually a forklift, George Raymond and Bill House of Greene New York, take credit for the invention of the shipping pallet – an essential component of the industry.  The Clark Material Handling Company, which began as the Colfor Tool Company in Buchanan, Michigan, generally gets credit as the “inventor” of the forklift, which they called a “Tructractor” at its inception back in 1917.  The other two early contenders for the “inventor” title are the Towmotor Company in 1919 and Yale & Towne Manufacturing in 1920.  Most of the early development of forklifts took place in the United States, with Japan entering the competition in 1956 with Toyota’s first lift truck model.  Toyota sold its first lift truck in the United States in 1967.

In and of itself, the Forklift Industry emerges as one of the unsung mainstays of our modern economy.  This becomes patently evident during the holiday season when you play the “forklift game” to determine how many forklifts the components of the product you buy through Amazon.com or any of its competitors have encountered from raw material to arrival at your front door.  Don’t tell the Grinch what you have discovered, because he may have something up his sleeve to cripple the industry and as a result, steal Christmas from the kids and their grandparents who anticipate it so eagerly.